When I first came into contact with phobic patients in my work with Professor Isaac Marks at the Maudsley Hospital, some 30 years ago, I was quickly struck by how many female patients described the worsening of their symptoms in the few days before their periods. An increase not just in the general pre-menstrual symptoms but in the tendency to panic, to become more anxious and to experience a heightening of the physical symptoms of anxiety. In some patients, the pattern was different with anxiety occurring during menstruation or just after. However, in these patients, there was still a predictable, cyclical pattern. This clear pattern, of course, provides some evidence that anxiety is linked to hormone function, but as an American colleague of mine, Diane Chambless, pointed out some 15 years ago, is that the symptoms can become part of a self-fulfilling prophecy. However, there is nevertheless a great deal of biological research that shows that female hormones play an important part in the regulation of mood and probably in the manifestation of anxiety.

If one looks at the basic facts about adrenalin, it is only too clear that the above phenomena are linked. Hormones are chemical messengers and are produced by the ductless glands or so-called endocrine glands. So, for example, Insulin is produced by the pancreas to regulate blood sugar and the thyroid produces thyroxine, which regulates growth. The master gland of the hormone system is the pituitary, which is found beneath the brain, over the roof of the mouth. The balance between hormones is finely adjusted by the pituitary and the whole system stays in a state of equilibrium in good health. However, if one hormone is produced in either abnormally high or abnormally low accounts, there are effects on other hormones. The classic example of this occurs in Throtoxicosis, a condition where the thyroid gland becomes overactive and produces too much thyroxine. One of the first systems experienced by people with Thyrotoxicosis is very often acute anxiety and some of this stems from the ‘knock-on effect’ to the adrenalin glands and hence, an outpouring of adrenalin. The increase in adrenalin output leads to the unpleasant symptoms of anxiety.

Recent research has shown that the female hormone oestrogen has an effect on specific microscopic parts of the brain responsible for the regulation of a chemical called 5 – Hydroxytriptamine. This very important substance is mainly responsible for the regulation of mood. This helps to explain why anxiety symptoms can become more prominent after childbirth or in menopause, as well as in the few days before a period. However, this work unfortunately has not led to any specific treatment for this pre-menstrual anxiety. Many doctors now advocate the use of hormone replacement treatment in menopause and there is a wide array of evidence that suggests that this treatment can be very beneficial for the depression and anxiety which often emerge at this time. There are also those who suggest that hormone treatment can be used in postnatal depression and, indeed, the evidence seems to be clear that some people are helped by this treatment. However, for many women, pre-menstrual anxiety remains a significant problem and for those who already suffer from panic attacks and phobias, this phase in the month makes a distressing and handicapping condition even worse and is therefore dreaded. What can be done?

One of the most important discoveries in recent years is the role that exercise plays in mood and anxiety and in the last ten years there has been a number of research studies that conclude that exercise in the week before menstruation is very helpful in reducing the symptoms. The difficulty for many women is that they report that this is the time when they least feel like exercise and even those who are in a regular pattern sometimes curtail their activities. I have found in clinical practice that these phenomena are worth looking at and most women can be encouraged to increase rather than decrease their exercise in the pre-menstrual week. The other matter that should be addressed is the issue of the self-fulfilling prophecy. While there is clear evidence that hormones underpin the vulnerability to an increase in anxiety, there is also no doubt that surges in anxiety are less than inevitable. Indeed, if you look at the diaries of women over a number of months, it confirms what most women already know, i.e. that sometimes P.M.S. is not as bad as usual, however, sometimes it is worse! Therefore, trying to not become preoccupied with the forthcoming period and saying “I’ll see how I’ll see how I feel when the time comes!” is probably the best approach. If the pre-menstrual anxiety is very distressing, it may be worth keeping a diary for 3 or 4 cycles, writing down in the diary each day perhaps using a rating scale of 0 – 100 the severity of various symptoms. Thus, this diary should include a rating of anxiety and depression, but should also include any other symptoms such as breast tenderness, bloating, or craving for certain foodstuffs. This diary-keeping exercise may well be very helpful to your G.P. and in some cases, it may be worth referring a patient to an Endocrinologist so that more detailed blood tests could be taken to see if there is in fact any particular hormone imbalance that needs correction.

I would, however, point out that in my experience, 90% of these blood tests tend to come back as absolutely normal and there is little further that can be done. Sometimes, people are sent away from a long line of specialists with the words “ You’ll have to live with it” ringing in their ears. As I have stated above, exercise may in fact be one route to help with this problem, but it may also be worth trying remedies such as Evening Primrose oil. Some of the complementary therapies and in particular herbal remedies and acupuncture have been reported as effective by some of my patients. As a man, I can obviously not fully understand the problems that many women suffer from pre-menstrual anxiety. However, I have found that looking at this aspect of the problem and developing simple strategies to help reduce the symptoms has been useful. Therefore, whether your therapist is a man or a woman, if this is a problem to you, you should try to look at solving the difficulty rather than “trying to live with it.” 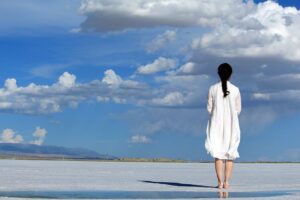 Professor Kevin Gournay is an Emeritus Professor at the Institute of Psychiatry. He has more than 35 years of experience and is the author of more than 130 articles and books. He is based in Cheshunt Hertfordshire.

2 thoughts on “Hormones and Anxiety”