From 1st September 2010 Paul Salkovskis has been employed as Programme Director of the doctorate programme in Clinical Psychology at the University of Bath, which will have its first intake of trainees in September 2011.

He worked as Professor of Clinical Psychology and Applied Science at the Institute of Psychiatry, King’s College, London and Clinical Director of the Centre for Anxiety Disorders and Trauma, South London and Maudsley NHS Trust from 2000 – 2010. He is editor of “Behavioural and Cognitive Psychotherapy”, the official scientific journal of the British Association for Behavioural and Cognitive Psychotherapy. He is also Head of Graduate Studies (Research) at the Institute of Psychiatry. He is a Fellow of the British Psychological Society. 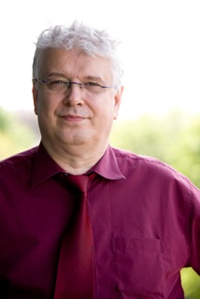 His main contributions have been in the areas of cognitive models and treatments of anxiety disorders and in health psychology. His theoretical paper (in 1985) on a cognitive theory of Obsessive compulsive disorder was a synthesis of the work of Beck and Rachman, and highlighted the role of the way in which intrusions were interpreted as a sign of “responsibility” for harm or its prevention. Such interpretations were described as motivating compulsive behaviour, paving the way for new cognitive strategies for the treatment of OCD. He been working on further developments in this model, and devised and evaluated a treatment protocol. More recently, he has applied this work to the understanding and treatment of child and adolescent OCD.

He worked closely with David M Clark on the development and validation of the cognitive model of Panic Disorder, and with Hilary Warwick on severe and persistent Health Anxiety (“Hypochondriasis”). With all of these disorders he has developed and refined innovative cognitive-behavioural treatment strategies. Paul also developed the concept of “safety seeking behaviour”, highlighting its role in the maintenance and treatment of anxiety disorders. This influential work has resulted in new ways of thinking about the use of behavioral strategies in cognitive therapy, resulting in a proper integration rather than a hybridized approach. In health psychology he has researched aspects of health screening and developed the concept of “evidence based patient choice”. More recently he and his team have been considering issues including dissemination of treatment and the application of the cognitive model of health anxiety to chronic pain.

He has published over two hundred scientific papers and book chapters. He has international collaborations in many countries in all continents of the world, and works closely with research organizations and service-user led charities. He recently received the Aaron T Beck award for contributions to Cognitive Therapy.

Professor Paul Salkovskis has shared with us his videos on anxiety disorders.