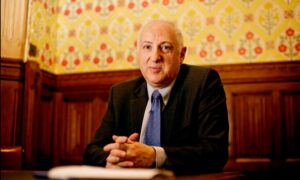 From 1983-1997 he was the Liberal (then Liberal Democrat) MP for Montgomeryshire in Mid Wales. During that time he served as spokesperson on a range of issues, including Home Affairs and the Law. He was Leader of the Welsh Liberal Democrats from 1992-7. He is now an independent peer.

He was appointed a Life Peer in 1999 and was awarded the CBE in 2012 for services to national security.

Lord Carlile is involved in numerous charities. He chairs WeAreWithYou and the White Ensign Association, and is president of the Royal Medical Foundation of Epsom College. He has a particular interest in mental health issues, and was a co-founder of the Welsh charity Rekindle.

He is the Chairman of the Lloyd’s of London Enforcement Board. He is Chairman of the not for profit company Design for Homes and is a founder director of SC Strategy Ltd., a strategy and public policy consultancy.

Lord Carlile is the President of The Security Institute, a Fellow of King’s College London, and a Fellow of the Industry and Parliament Trust. He holds Honorary Doctorates of Laws in universities in Manchester, Wales, Chester, and Hungary.

He has a long experience of child safeguarding issues.

Check out No Panic’s 5 Step Approach